Sean Hession's early affinity with Frank Sinatra and the Big Band era forged an introduction to performing. Accruing vast professional experience and a wide-ranging repertoire of classic standards (800 +) spanning the 20's to the 60's, he is well known for his uncanny resemblance to the sound of Sinatra.

With Frank Sinatra's popularity ever much to the fore, Seán's act is most sought after in the field of corporate entertainment and weddings. He has performed at numerous conferences; charity shows, sporting functions, product launches, overseas/nationwide weddings and high profile private parties.

While building his career, he has appeared many times at the John Field Room of the National Concert Hall and has performed a variety of tribute shows celebrating the works of Sammy Cahn, Cole Porter, George Gershwin and Richard Rodgers, at the Andrew's Lane Theatre, Dublin. 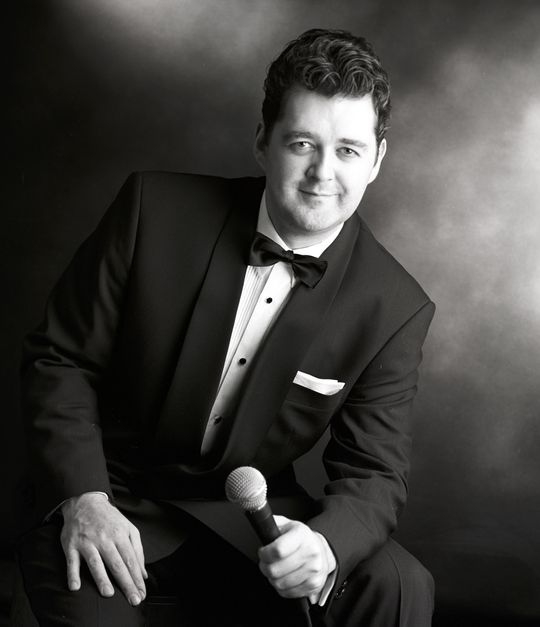 Over the past few years, Seán has had at least 25 successful sell-out concerts in The Olympia, The National Concert Hall, Vicar Street and the Helix - Dublin, UL Limerick with Frankly Sinatra The Show (Dave Gold 16 Piece Big Band featuring world-renowned guitarist Louis Stewart and the brilliant Jim Doherty on piano). He has appeared on RTE Television with The Rat Pack from Farmleigh House with the 65 Piece RTE Concert Orchestra and Big Band conducted by Bobby Lambe to great critical acclaim and returned further solo sell-out shows at the NCH in April and May 2004. Later that year he sold out the Mahony Hall, Helix for two nights in December.

Always increasing his repertoire, he reprised new shows to the NCH (April 2005/May 2006) and the Helix (December 2005/December 2006) for more sell-out concerts to enthusiastic audiences with standing ovations.

Another sell out NCH concert in May 2007 was a personal highlight with standing ovations and the Helix later followed in December which was received in the same positive manner.

His sell out 2008 Helix concert was no exception.

Also, his 2009 show at the Helix on Frank Sinatra's Birthday, Saturday 12th December, in aid of the Irish Heart Foundation was a great success.

Over the past number of years, Sean has established himself as the leading Sinatra exponent, having several T. V. (20 +) and radio (25+) appearances to his credit.
These include shows such as R. T. E.'s Late, Late Show and The Kelly Show for Ulster Television. Gerry Ryan, Today with Pat Kenny, Derek Mooney and is a regular on Ryan Tubridy Radio Shows.

Product campaigns include signature songs for Guinness, Finches Orange ("I've got you under my skin"), Toyota ("That's Life") National Lottery ("Who wants to be a Millionaire") Easigold ("Nice'n'Easy), Dimplex ("Let it Glow") and ("Sun Smart") for the Irish Cancer Society radio Advert.

The exposure and calibre of concerts prompted Seán to record his first studio album Frankly Sinatra...The Hession Session in 2004 to critical acclaim with his second, Get Out Of Town The Hession Session Vol. 2, released in 2006 - both of these with the Dave Gold 16 piece Big Band. His recently released third album "A Late Night Hession Session" is a jazz ensemble with Louis Stewart (To review/order/download released
albums, see Homepage).

Seán remains a loyal and an avid
Sinatra follower and an aficionado of the Big Band and Torch song
sounds.

Strictly necessary cookies
These cookies are essential for visitors to be able to browse the website and use its features. None of this information can be used to identify visitors as all data is anonymized.

Currency
Purpose: To be able to show prices in the currency matching the visitor's preferences.
Duration: 30 days.

Google Recaptcha
Purpose: To be able to validate whether the visitor is human and to limit the amount of spam from contact forms.
Duration: 1 year.
Provider: Google.


Third-party cookies
These cookies collect information about how visitors use the website, like which pages they've visited and which links they've clicked on. None of this information can be used to identify visitors as all data is anonymized.

ga
Purpose: Registers a unique ID that is used to generate statistical data on how the visitor uses the website.
Duration: 1 year.
Provider: Google.

gid
Purpose: Registers a unique ID that is used to generate statistical data on how the visitor uses the website.
Duration: 24 hours.
Provider: Google.

We also integrate with social platforms on this site that allow you to connect with your social network in various ways. Social media integration will set cookies through the website which may be used to enhance your profile on social media sites or contribute to the data they hold for various purposes outlined in their respective privacy policies.